What is a Partnership Agreement? 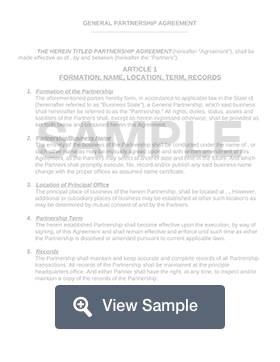 What is a partnership agreement?

The agreement should be completed before the parties begin working together on a business. This will ensure that they are aware of their responsibilities and also so that a contingency plan will be in place.

If you want to set up an agreement for a small business idea, get all the information you can about your idea beforehand. Remember that this agreement will need to be signed by all parties. To ensure you have a legal agreement, consider asking for legal counsel and a witness to sign the agreement as well.

Who needs a partnership agreement?

Any group of people who are running a for-profit business together should have one.  This agreement serves as the operating agreement for your company. It sets out rules and guidelines for business partners to follow so that they can avoid future conflict.

Any group of individuals who are forming a business together should have an agreement.  A partnership can consist of friends, family, or strangers that meet online.

Create a free Partnership Agreement in minutes with our professional document builder.

When is this agreement needed?

Consequences of not using one

If you do not use an agreement, your state’s default laws regarding partnerships will apply.  If you want to establish your partnership in a different manner, an agreement will allow you to do so.

Failure to have a valid agreement may also subject you to additional tax liability.  A partnership is considered a “pass-through” entity for tax purposes, which means that profits and losses pass through the business directly to the individual partners.  If there is no set agreement about ownership share in the partnership, the state will assume that the partners share equal tax liability, regardless of who contributed what to the partnership.

Pros and Cons of different types of agreements

Cons of Limited Liability Partnership: Must comply with state filing requirements, use limited in some states, tax limits in some states.

Components of a partnership agreement

Partnership name – The legal registered name of your partnership. It can be anything you choose as long as it is not already being used by somebody else.

Partners - Names of each person who has ownership in the partnership business.

Contributions – How much each partner is contributing in cash, property, and other intangible assets. Decide how the ownership of the partnership will be split. Laying out these details clearly is key to avoiding confusion and disputes later.

Distribution of profits, losses and draws – How you plan to distribute the profits of this partnership.

Authority to Act for Partnership – The default arrangement is that any partner can form a binding agreement for the whole partnership. If you don’t want this to be the case, you need to state that explicitly in your agreement.

Group Decisions – There should be a provision in your agreement ascribing voting power to each member of the partnership. Decide whether it will be split evenly or divided according to other factors, such as investment percentage.

Management Duties – Determine who is involved with:

New and departing partners – With any luck, your new business will flourish, and will at some point be in need of expansion. That means new partners. You may also experience the other side of things, in which a partner has to withdraw from the agreement. This can be due to anything from a practical choice to an untimely death. The wisest move is to lay out a standard procedure for adding partners, to ensure fairness and smooth sailing when the time comes.

Resolving Disputes – Court can be an ugly place, especially between a once tight team. It’s a good idea to arrange for dispute resolution in your agreement. Set up a system where a mediator or other outside party is brought in to help settle disagreements outside of court.

If you’re going into business with someone, it’s a good idea to set the details of the arrangement in writing.  When you are writing the agreement, you should keep some legal issues in mind.

There are two main bodies that dictate the workings of a business partnership. To wit – the laws of the state in which the agreement is made and the rules laid out in the official document. Surprisingly, you don’t need to base your agreement’s tenets entirely upon the governing state’s laws. The rules laid down by partners generally supersede those rules enforced by the state. This means you have relatively free rein when it comes to many key elements, such as divisions of profits, assets and responsibilities. However, any issues not concretely outlined in the agreement are automatically seen as reflecting the laws of the state.

Why should you put your partnership agreement in writing?

The short answer here is “see above.” If you don’t put your agreement in writing, the state gets to control it in its entirety. If things go awry, both parties have no control over the outcome. What’s more, it makes it more likely that things will go awry, as you have not drawn up the rules of partnership yourselves. In business arrangements, and in fact many areas of business, it is always best to err on the side of micromanagement.

What should you put in writing?

There are three basic types of business partnership. The first is called a “General Partnership.”  It runs on a majority vote and holds all members proportionally or equally viable. If you want to follow a different model that protects some partners from liability, like a Limited Partnership or an Limited Liability Partnership, you’ll want to take the time to draw up an agreement.

A partnership agreement should cover the following bases –

Will business decisions be made by a majority vote? Will you elect one partner to make decisions? Will each partner be able to vote equally or will level of investment govern level of control. It may seem fair to divide power equally, but then having an even number of partners presents the risk of attrition. Keep this in mind when drawing up your agreement.

Division of interest among owners – Often this is equal, but it does not have to be.

Withdrawal procedures – Are there circumstances where a partner can be forced into an involuntary withdrawal? How will the price of one owner’s shares be figured if he or she withdraws? How will payments work for his or her share? This is a particularly important decision to make, as the financial backlash of withdrawal can get quite ugly in court.

In sum, it’s worth getting your agreement down in writing, either by digging up a free partnership agreement template on the internet, writing it from scratch, or seeking legal advice.

Your agreement should address tax elections and select the partner who will represent the partnership for tax purposes.

How to dissolve a partnership agreement

An agreement can specify whether partners may withdraw and what that partner has to do to withdraw.

An agreement should specify how they would like assets distributed in the event of partnership dissolution.

What to do along with creating a partnership agreement

Each jurisdiction has different rules and regulations regarding partnerships.  You should check with your state and local commerce departments to determine if you are required to register your partnership.