What is a Bill of Lading?

A bill of lading is a form that documents items being shipped from one location to another through a freight carrier. It documents the description of each sort of item as well as how many of each item is included. Since freight shipping often involves multiple changes, the companies involve often check the bill of lading against what they receive and sign off on the document if it is correct. 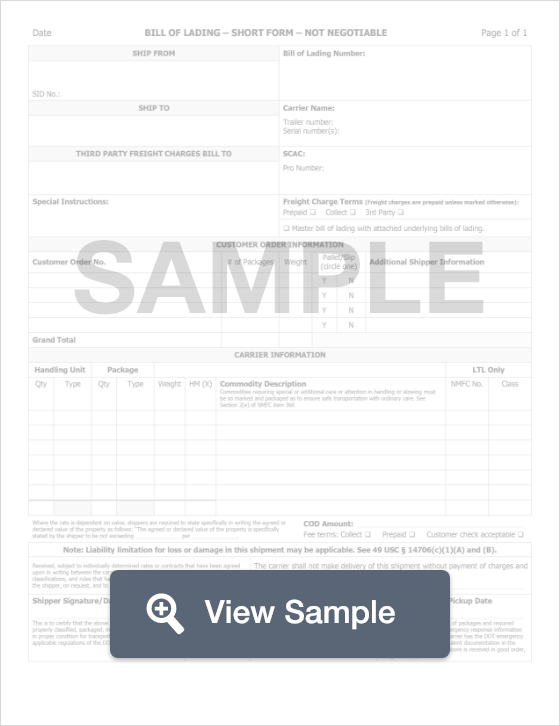 A bill of lading (also referred to as a B/L or BoL) is a legal document that details goods being transported from a shipper or seller to the recipient via freight carrier. The B/L will include various information including the type of goods included in the shipment, the number of shipping units, the destination address for the transaction, and the carrier name. This document should always be included in a transaction involving shipped products because it acts as a transport document.

This important document protects the seller, the shipper, and the recipient. It helps ensure that all the products are successfully delivered. If there is a problem, the B/L can help you figure out where the problem occurred. In fact, if a claim is filed for compensation related to the goods, a B/L must be provided.

The document may be negotiable or non-negotiable. When a B/L is negotiable, it is often used for credit transactions; it could be used as a letter of credit. It can be bought, sold, or traded. It can even be used as collateral on which to borrow money.

A bill of lading (BOL) is used during the shipment of freight. It acts both as a contract between the business or individual shipping the goods and the contracted freight carrier. It’s an important document not just as a contract. It’s also important because it gives the freight carrier and subsequent delivery company information to verify they have the full shipment as well as where it came from and where it is going.

When do you use a Bill of Lading?

A bill of lading is most commonly used for the following purposes:

What are the main sections of a Bill of Lading?

The main sections of a bill of lading include:

UPS, one of the world’s most trusted freight carriers, has an excellent bill of lading form available as a PDF.

Bills of Lading vs Charterparties

A bill of lading documents a purchase of merchandise. The parties are primarily the seller and a buyer. It may document the items shipped (including the quantity), the condition of the items, the item number, list the freight forwarder, mention special rules for handling the goods, and is signed by those who handle the items while they’re being shipped.

A charterparty is a document that outlines the relationship between a shipowner and the charterer. So, it is the agreement between the seller and the shipowner who will transport the goods. The owner of the boat may or may not act as an agent on behalf of the seller. It usually lists the freight charges.

Types of Bills of Lading

When it comes to shipping and trade, a B/L is one of three official documents used to guarantee proper accounting of shipments. A template helps ensure that people or businesses receive the merchandise they pay for. It also ensures that the seller receives proper payment for their goods. The template provides clarification and accountability for both parties, particularly in international trade.

When shipping or receiving goods, it is critical that a B/L be part of the process. In fact, free forms are available online to make the process easier. A template has three major roles. First, it acts as proof that the shipping line promised to carry the goods. Second, it acts as a “receipt” – proof that the merchandise listed was received and is in good order. Third, it is proof of ownership of the goods, an original bill.

Adjustments can be made to explain different things on a B/L. For instance, it might be noted “received for shipment." This would indicate that merchandise was received, but may not yet be in transit. A “shipped on board” note indicates that the merchandise was physically loaded and is in transit. Merchandise that is transported by sea often requires a “port to port” notation on the B/L. This limits the carrier’s responsibility for the merchandise to only that time that it is physically on the vessel. Thus, origin and ultimate delivery should not be mentioned.

A bill of lading is a legal document/contract between the shipper and carrier; it details the type, quantity, value, origin, and destination of goods being transported, as wells as the terms of their transportation, including the particular vehicle the goods are to be transported on, how the goods must be handled, and how freight shipment charges will be paid. The bill of lading must accompany the shipped goods and be signed by a representative of the shipper.

There are several types of bills of lading that can be included in either of the above categories, each with unique terms and conditions; the kind of goods and industry preferences determines which category.

Some common types of bills of lading:

A house bill of lading requires the following:

An ocean bill of lading, a contract for shipment between a shipper, carrier, and a receiver, is required for the transportation of goods over international waters. It is a legally binding document between the shipper and the carrier that includes the specifics of what and how much is being shipped, the value of the goods being shipped, the packing used during transport, and the shipping destination. An ocean bill of lading is the carrier's receipt to the shipper and an invoice.

An order bill of lading is employed when goods are being shipped in advance of payment; the carrier is required to deliver the cargo to the importer, and, if endorsed by the exporter, the carrier may transfer title to the importer. Order bills of lading that have been endorsed by the exporter may be traded as a security or function as collateral against debt obligations.

Through Bill of Lading

Intermodal freight consists of materials and products transported by container via a variety of vehicles. The International Organization for Standardization (ISO) sets out the standards required for the containers used in intermodal freight.

There are two primary documents used in the domestic and international transport of goods by sea: sea waybills and original bills of lading. A sea waybill is a contract of carriage; it serves as a contract between the shipper and the carrier. A sea waybill also constitutes a receipt of the goods shipped; it identifies the goods, pieces, and weight. A bill of lading likewise serves as a contract of carriage and the receipt of the goods being transported, but it is also a document of title that bestows ownership.

Also known as a “straight bill of lading,” a sea waybill is employed when the shipper intends to release ownership of the cargo immediately. Upon receipt of the goods, the person identified in the document needs only to verify their identity, rather than present a document to claim the freight.

When the goods are loaded, the shipper receives a sea waybill only as a reference; neither the shipper nor the importer is required to submit any additional documents to the carrier. As a sea waybill does not confer title to the cargo, it can be automatically released as soon as it is available at the port.

It is preferable to use a sea waybill in the following situations:

A supply chain is a network maintained by a company and its suppliers to produce and distribute a particular product or service to the final purchaser. A supply chain includes producers, vendors, warehouses, transportation companies, distribution centers, and retailers. The functions in a supply chain include product development, marketing, operations, distribution, finance, and customer service, all the steps required to prepare the product or service for sale to the customer.

Create a free Bill of Lading in minutes with our professional document builder.

Common Uses for a Bill of Lading

The most common use of a B/L is a cargo receipt. Usually, someone (often a business) is importing items that must be shipped in via ocean. It is often used for customs or insurance during the shipping process. However, it ultimately acts as a contract between the seller and the buyer.

Components of a Freight Bill of Sale

The components of a B/L include:

How to Fill Out a Bill of Lading

The B/L will be completed by the seller. They may receive a template from the cargo company they plan to use. Below, you’ll learn how to fill out a B/L, but keep in mind that it may slightly vary depending on the shipper and their template.

How Does a Purchasing System Work?

A B/L is one of several documents managed by a purchasing system. Because a B/L is part of a purchasing system, it’s important that you understand how one works. When a business needs specific items, they know that they must order them. The manager may complete a PO that is reviewed by a manager or supervisor for approval. Once approved, the order is sent to the vendor. The vendor gathers the items to match the quantity listed by the business and prepares them for shipment. A bill of lading is created. The vendor and a representative of the shipping company will review and sign the B/L. If it is accurate, they will send the purchase order and the bill of lading back to the business. The business then issues payment for the items.

Segregation of duties helps prevent theft in the workplace of the items that are ordered and received. The concept helps ensure that one employee doesn’t have too much control within the business. Looking back at the purchase system section, you’ll remember that one person may create the list of items the business needs and another person approves it before the order is placed. That is an example of segregation of duties. Of course, in the concept of buying items for a business, the process continues: the purchase order and the B/L are compared by two different people. When the bill is paid, the accountant who did not purchase or approve the order would reconcile the statement.

A bill of lading is used to inventory goods that are being sent from one person or business to another. A copy of the bill of lading is sent with the goods and the receiver can use it to verify they've received everything that was sent.

An invoice is a document that verifies the services or goods given to one party and the amount of money they should pay. An invoice should also include the date the payment is due and include payment options.

A 1099-misc form details receipt of financial assets, such as rental payments, royalties, prizes or awards or other payments for tax purposes.

A W-2 is a legal document that businesses must provide to their employees if they make a certain amount of money each year. Employees use their W-2 when they file their taxes. It gives them important information such as what they made and how much money was withheld for taxes.