What is a Notary Form?

A notary form template is used by notaries as certification that they gave the proper oath, obtained proof of the signer's identity, and provided their information as a notary public. This is an important form because notaries are legally bound to follow certain laws about notarizing signatures. A notary form can be used in the event that the person needing your services as a notary doesn't have the proper form or proper language as part of their documents. 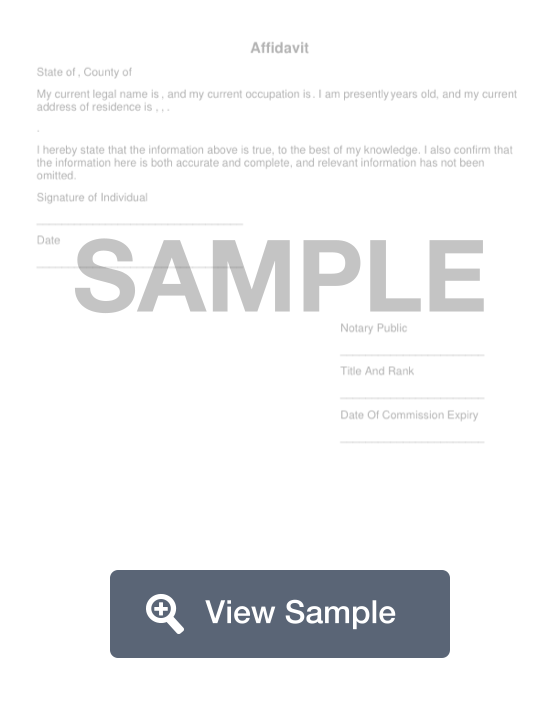 What is a Notary Form?

A notary form is a document used by a notary public to notarize certain important documents such as a living trust, mortgage, deed, or non-resident affidavit. Notaries public are people who are authorized by the state to carry out the notarization process, which involves:

In some instances, the notary will also verbally question the signer.  For example, if the document requires an oath, the notary may ask, "Do you swear under the penalties of perjury, that the information contained in the document is the truth, so help you God?"

All notary forms must be completed, signed, and stamped by a notary public in order for a signature to be considered authenticated.

A person can obtain a notary commission by:

Note: Notaries may have continuing obligations to their state, such as letting the state know about any change or name or address change.  The application that you submit to become a notary may become a public record.

Create a free Notary Form in minutes with our professional document builder.

What Does it NOT Mean to Have a Document Notarized?

Having a document notarized does not make the document more legal nor does it validate the document or verify that the statements in the document are true. It simply means that a notary has properly identified the signer of the document and verified their willingness to sign and mental capacity.

How to Fill Out Our Free Notary Form - Step by Step

How Do You Get a Document Notarized?

Each state has its own regulations and guidelines regarding their notaries’ duties and the notarization processes. Generally, however, in order to have a document notarized, you must go to a notary near you, have your identity verified, sign the document in the notary’s presence, and pay a fee if applicable.

Your Identity - Properly verifying your identity is the notary's primary duty. Your identity may be verified by one or more of the following methods:

Your Signature - You must appear in person to sign the document in the presence of the notary. The document must not be signed beforehand.

The Fee - Some banks and financial institutions allow account holders to have documents notarized for free. Otherwise, you may be required to pay a small fee, typically less than $20.  Some states limit how much a notary can charge for an individual notarization (ex: in California and Florida you can only charge $10, Pennsylvania notaries can only charge $5, in states like Maine notaries can charge any fee they feel appropriate).

Once a notary has verified your identity and accepted your fee, they will stamp and sign your document with their notary seal.  A notary seal generally indicates when a notary's commission expires. If the notary stamp does not have an expiration date, the notary can print "My Commission Expires on" and the date under or near the signature.

Where Can You Get a Document Notarized?

There are many notary directories on the internet. Use your location and the word "notary" to find a place to get a document notarized near you.

Some common places where you may have a document notarized include:

Note: you cannot get a document notarized at a post office.

In addition, there are notaries who are available to travel to your home or office to notarize documents. These "mobile notaries" often include a travel charge along with their fee.

Finally, you may be able to have a document notarized online, however, you should first find out if this will be acceptable for your purpose. Some transactions may require that you appear physically in the presence of the notary to have a related document notarized.

A notary public is an individual of proven integrity designated by a state government, generally the secretary of state, to act as an impartial witness in performing a variety of official, fraud-deterrent duties, specified by law, related to the signing of important documents. A notary has the power to witness the signing of documents and administer oaths. The witnessing duties of a notary specified by law are known as notarizations or notarial acts.

Notaries are publicly commissioned as "ministerial" officials; unlike "judicial"officials, notaries are required to follow written rules without exercising significant personal discretion. A notary public in the United States is not an attorney, judge, or high-ranking official. A notary's public trust is based on impartiality; it is their obligation/duty not to act in situations where they have a personal interest and to never refuse to serve a person due to race, nationality, religion, politics, sexual orientation, or status as a non-customer.

A notary's function is to ensure that all signatures on a document are legitimate. A notary screens the signatories to documents for their correct, verifiable identity, their readiness to sign without intimidation/undue influence/coercion, and their knowledge/understanding of the contents of the document/transaction in question, including that they are capable of making sound decisions. Certain notarizations also require the notary to put the signatory under oath -- to declare under penalty of perjury that the information contained in the document in question is correct and true.

As an official representative of the state, a notary public certifies the proper execution of life-altering documents; the conveyance of real estate (deeds), wills, powers of attorney, and prenuptial agreements generally require notary services. Notarization is the official fraud-deterrent process that assures the parties of a transaction that a document is authentic, and can be trusted.

A notarized document is one that has been certified by a notary public: the notary public has verified the identities of all the parties signing the document (by asking to see a current ID that has a photo, physical description,  and signature), witnessed the signatures, and marked the document with a stamp (or “seal”). The notary signature is the handwritten name of and by the the notary that matches exactly the name on the notary’s commissioning paper.

A certificate is a completed, signed, and sealed statement by a notary that includes the details of a notarization and appears at the end of a signed document or on a paper attached to it. A certificate form is a notarial certificate.statement on a separate sheet of paper attached to a document; it is used when no wording is provided, when the provided certificate wording does not comply with state requirements, when there is no space for the seal on the document  or when a preprinted certificate has already been used by another notary.

A notarized document means that the signature on the document is legitimate -- nothing more. Notaries are not required or expected to read or evaluate the document in question, or give legal advice.

Each state and U.S. territorial jurisdiction adopts its own laws governing the performance of notarial acts.

A notary acknowledgment is generally performed on documents controlling/conveying ownership of valuable assets, including real property deeds, mortgages, deeds of trust, and powers of attorney. For an acknowledgment form, the signatory must appear in person at the time of notarization to be positively identified and to declare (“acknowledge”) that the signature on the document is their own, that it was made willingly/voluntarily, and that the provisions in the document in question are intended to take effect exactly as written.

A jurat is typically performed on evidentiary documents critical in legal -- civil and criminal -- proceedings, legal documents that include affidavits, depositions  and interrogatories. Depending on the jurisdiction, a jurat is also known as an affidavit or a verification on oath or affirmation. For a jurat, the signatory/affiant (signer of an affidavit) must appear in person at the time of notarization to sign the document and to speak aloud an oath (a solemn pledge to a Supreme Being) or affirmation (a solemn pledge on one's personal honor) promising that the statements in the document are true.

A copy certification is performed to confirm that a reproduction/transcription of an original document is true, accurate, and complete, including college degrees, passports, and other important personal papers that cannot be certified by a public record office and that the holder must submit for some purpose but does not want to submit the original document for fear of loss. A copy certification is not an authorized notarial act in every state; in jurisdictions where it is authorized, it may be executed only with certain kinds of original documents.

The purpose of a notary statement is to verify the authenticity of a statement or act; it demystifies and streamlines the authentication process. Such statements are mainly employed to verify written statements during court proceedings, but they are also used in a variety of legal transactions, including real estate and finance-related interactions.