What is a Prenuptial Agreement?

A prenuptial agreement may be a legally binding contract entered into by two individuals who want to get married. The purpose of a pre-nup, as it is also known, is to protect the interests of each party. Before signing a pre-nup, it is important to have it reviewed by a lawyer to make sure that you're not being treated in a way that is grossly unfair. Although most prenuptial agreements may be legally binding, there are certain instances where a family law judge may throw out or alter the agreement because of some of its conditions. 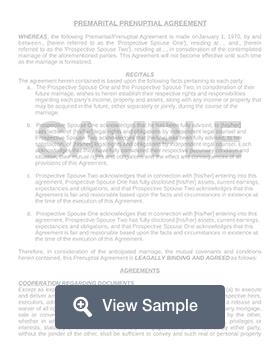 What Is a Prenuptial Agreement Template?

A prenuptial agreement is used between a couple who have decided to get married. The agreement outlines what will happen to assets, debts, and income if the couple divorces or if one partner dies. The form serves to protect both parties. Prenuptial agreements are commonly used by couples who have substantial assets or earnings.

A prenuptial agreement form can be used for marriage or a civil union. Clauses can be included in the agreement for issues such as adultery. This clause could include stipulations that state the adulterer will forfeit their rights to assets or property in the event of a divorce filed because the spouse was unfaithful.

Prenuptial agreements may be legally binding contracts. However, they do not have to be enforced if both parties agree to another settlement in a separation or divorce scenario. These agreements do not necessarily affect custody of any children born into the marriage even if it is mentioned within the agreement because the children's welfare will be considered first and foremost by the court.

Prenuptial agreements are also referred to as:

Who Should Use Prenuptial Agreement Forms?

Despite the bad reputation that prenuptial agreement forms receive, they are meant to help protect both parties in the likelihood that a separation or divorce happens. So, they can be used by any couple who plans to get married. However, a premarital agreement is particularly helpful if you:

Create a free Prenuptial Agreement in minutes with our professional document builder.

Components of a Prenuptial Agreement

Because a prenuptial agreement may be a legally binding contract, it needs to have certain information in it. It must also include all of the elements that make up a legal contract. The parties to the contract must be of legal age. They must be of sound mind. They may not be entering into the contract because they’re under duress.

Difference Between Separate and Shared Property

Because a prenuptial agreement is often used to specify which property will be given to which party if a divorce or separation occurs, it’s important that you really understand the difference between separate property and shared property.

Using a prenup to call certain assets “separate” means that you’re saying that you (or your spouse) solely and fully own that item. If the relationship ends, the owner of the separate property continues to own that property. They can do whatever they want with it. If you buy a condo, a car, or start a retirement account before you meet your spouse or before you marry your spouse and that item is only in your name, it is considered separate property. That is because you acquired the item before the marriage took place. A prenuptial agreement helps ensure that your items before the marriage remain as yours alone if the relationship ends.

Shared property is defined as any asset that is acquired while the couple is married. Depending on the state you live in, even property that you buy during the marriage that is only in your name may be considered marital property. When a marriage ends, the value of the marital property is split 50 / 50. One spouse may have to buy out the interest of the other spouse in an item. Property division can get quite messy during the divorce process.

A traditional prenuptial agreement addresses financial assets as well as physical assets. Overall, it addresses what will happen from a financial perspective if the couple becomes involved in a divorce.

A conflict resolution prenup doesn’t outline what will happen financially if a divorce or separation happens. Instead, if explains how the couple will try to resolve conflict if it gets to the point that they’re considering a divorce.

It’s often said that using a prenup means that a couple doesn’t really love each other. However, that’s just not true. A prenup helps the couple in many ways. It can:

Of course, like with any sort of legal document and major life decision, there are also drawbacks to using a prenuptial agreement:

Before you sign a prenuptial agreement, you should seek legal advice from your own attorney (not an attorney that works with or for your future spouse) to determine whether the agreement is valid, how it may benefit you, and how it could be harmful in the long run. Ultimately, only you can decide whether you should enter into the agreement.

Can a Prenuptial Agreement Be Voided?

Yes, a prenuptial agreement may be voided. If it doesn’t comply with the governing laws of the state where it was written and signed, it may be voided. It may also be voided if it does not include one of requirements discussed above under Legal Considerations.

Can You Sign a Prenup Agreement After the Wedding?

Yes, it can be signed after the wedding. A prenup can actually be created and signed at any point during a marriage. However, it is generally done before a wedding happens because everyone is happy with the relationship.  If an agreement is signed after the couple is married, it would be called a postnuptial agreement.

Like any other sort of contract, there are limitations to a prenup. First and foremost, limitations may be imposed by state or federal law. Your premarital agreement should be reviewed by a lawyer to ensure that it complies with the laws in your state. The most important things that your state law may forbid include: