What is an Independent Contractor Agreement?

An independent contractor agreement is a contract between an independent contractor and the business or individual needing their services. It explains the duties of both parties involved. The agreement also includes a detailed description of the job that should be done, how it should be done, the payment and when it will be made, and other clauses such as a confidentiality clause. 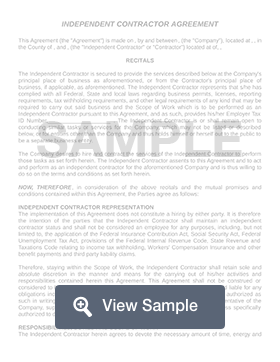 What is an independent contractor agreement?

This legal document details an agreement between an individual or company and an independent or freelance worker. This is an important agreement for both parties. The agreement should outline the work to be done and what kind of payments will be rendered for services.

This agreement requires personal information from both parties, such as names, addresses, and contact information. The agreement should also include detailed information about the services to be provided and how the contractor will be paid for work. Other information can be included as needed, such as confidentiality clauses or length of employment.

The agreement should include the entire agreement between the parties and should be signed and dated by both parties. The contract should be kept in both the employer's and the contractor's records for future reference. A witness may also be needed, or legal counsel can look over the agreement.

Create a free Independent Contractor Agreement in minutes with our professional document builder.

Why Should You Use an Independent Contractor Agreement?

You should use this agreement to protect your business interests.  For business owners, a contractor agreement details the work that will be completed, when it should be done, and how much you will pay.  The agreement will also shield you from liability issues. This agreement can protect your assets and any trade secret or other confidential information.

If you are an independent contractor, this agreement will protect your interests if you provide work and are not paid. If you provide a contract for your clients you will appear professional and organized.

When should you use an independent contractor agreement?

Why should businesses classify workers properly?

What happens if workers are classified incorrectly

The United States Department of Labor (DOL) and the Internal Revenue Service (IRS) conduct audits of companies to determine if employees have been misclassified as contractors.  The penalties for an improper classification will depend on whether the misclassification was unintentional, intentional, or fraudulent.

Penalties for wrongly classifying employees as independent contractors include:

The IRS has the right to impose additional fines and penalties if they suspect fraud or intentional misclassification of employees.  An employer can be subjected to penalties that include 20% of all wages paid, plus 100% of Social Security and Medicare taxes (both the employee’s and the employer’s share).

Criminal penalties of $1,000 per misclassified worker and one year in prison may also apply.  The person who is responsible for withholding taxes could also be held personally liable for any uncollected tax.

There are many ways to differentiate an employee from an independent contractor.

If you’re trying to hire a freelancer, there are numerous online resources and staffing agencies that can help you find one.  The numerous freelance websites that are available typically have portfolios and profiles where you can search for freelancers that meet your specifications and view a freelancer’s past work and reviews from past clients.

If you are unable to meet with your freelancer in person, you can set up a phone call or video call for an interview.  If you are looking for work on a large project, you can test the freelancer’s skills by offering them a small paid project first.

Advantages to hiring a freelancer

There are many advantages to hiring independent contractors instead of a regular employee:

If you hire an independent contractor, you may be concerned with protecting any classified or proprietary information that you share with the contractor.

You can protect yourself by including special terms in your independent contractor agreement.  These terms would constitute a confidentiality agreement. If you are concerned with conflicts of interest or the contractor soliciting the client, you can also include terms about non-solicitation and non-competition.  If your contractor does not comply with these terms, you will have a claim for breach of contract and should seek legal advice.

In the United States, federal law is the governing law for copyrights.  According to the U.S. Copyright Act, the person who commissions a “work for hire” is the initial owner of the copyright.  A “work for hire” includes creative work that is developed by an independent contractor in certain circumstances. This means that if you commission an independent contractor to create work product for you, you will often own the copyright.

However, the parties can agree by contract to alter the ownership of the copyright.  The agreement can be drafted so that the independent contractor retains ownership of the intellectual property by the company has a license to use the work product.

Non-Compete Clauses in a Contractor Agreement

There are also restrictive covenants that can be included in the written independent contractor agreement, depending on the work involved:

Some states do not permit restrictive covenants. A payer/hiring company should consult an attorney/law firm regarding the inclusion of such provisions in their written agreement with an independent contractor.

The IRS will assume that a person is an employee unless you can prove otherwise.  If you are ever audited by the IRS, you will need to show them the freelance contract, all past invoices, and proof of payments to prove independent contractor status - so make sure to save all of this information.  If you are not sure if a worker would be considered an employee or contractor, you can request that the IRS makes a contractor status determination for you by filing a Form SS-8.

All important IRS forms and instructions on filling them out can be downloaded from the IRS website.