What is a Memorandum of Understanding?

A memorandum of understanding (MOU) is a document between at least two parties that explains the proposed agreement between them. It is a document that brings together the thoughts and expectations between the parties, expressing a common line of action. An MOU is a more formal alternative to a handshake or gentlemen's agreement. 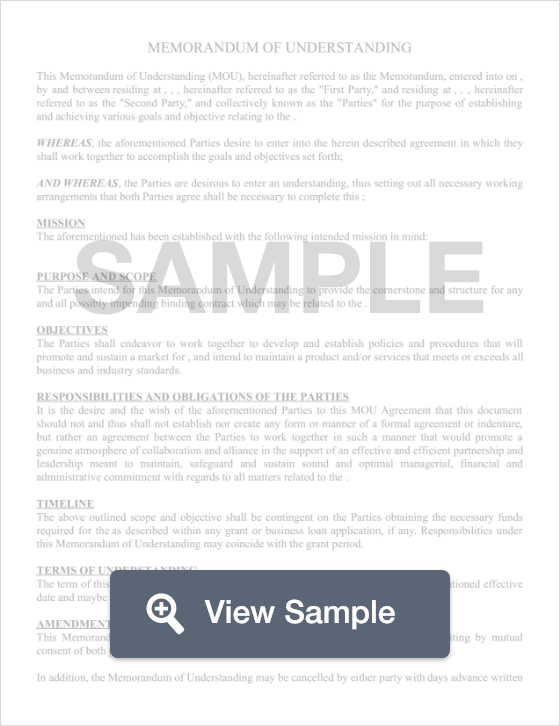 What is a Memorandum of Understanding?

A Memorandum of Understanding (MOU) is a short written statement outlining the agreement between two or more parties or signatories who agree to do or not to do certain things moving forward into the future. In the Collins English Dictionary, the document is an agreement between the parties that isn't a legal document. So, while an MOU isn't legally enforceable, it is a written record that often acts as the first step in creating a formal contract or partnership agreement.

A Memorandum of Understanding is sometimes also known as a “letter of intent.” However, this isn’t entirely correct. See our section on “MOU vs Letter of Intent” to learn more. Both an MOU and a letter of intent can be used for diplomatic communication between the parties since it serves to ensure that those involved are on the same proverbial page.

Create a free Memorandum of Understanding in minutes with our professional document builder.

The Essential Guide to Using a Memorandum of Understanding

Memorandums of Understanding are somewhat complicated documents that occupy the space between informal non-binding agreements and legally binding contracts. In this guide, we detail the differences between MOUs and other business agreements, how to write one, and when to use one. With the information provided, you'll be better prepared to utilize MOUs.

When are MOU's Used?

Individuals and organizations use memoranda of understanding in a variety of situations including:

Another form of MOU used in business and for personal reasons is an information memorandum. This document explains the information that the parties have related to whatever situation or project they're involved in. It may also be called an offering memorandum.

Governments use MOUs within their agencies and in international relations. For example, during the 2004 United States presidential campaign, John Kerry and George W. Bush agreed to a 32-page MOU that created guidelines for their televised presidential debates. In 1972, President Richard Nixon signed an MOU with the Soviet Union that established a telecommunication link between the two countries in order to prevent nuclear war. Under international law, MOUs are considered a type of treaty.

The Fans and Opponents of MOUs

MOUs are popular among certain industries and less so among others. Lawyers, for example, generally do not like MOUs because of their legal ambiguity. Government bureaucrats, on the other hand, like MOUs because they are informal and allow them to avoid the red tape and extended timelines associated with formal contracts.

Memorandum of Understanding vs Similar Documents

An MOU is not a contract. It's a written agreement of mutual understanding that is more formal than a verbal agreement, but it not a legally binding agreement like a contract. The key difference between an MOU and a contract is how enforceable it is.

An MOU, in other words, articulates mutual understanding that isn't legally binding. It serves as an outline of expectations. A contract, on the other hand, establishes a series of legally binding obligations. If the obligations in the contract aren't met, the party that was injured by the unfulfilled contract generally has the right to sue.

MOU vs Letter of Intent

MOU vs Memorandum of Agreement

A memorandum of agreement (MOA) is a document that is written between parties to work together cooperatively on a project or objective.  It details the obligations and commitments of the parties and allocates each parties' risks. An MOA is legally binding.  An MOA is more specific than an MOU.

What are the Components of an MOU?

Because an MOU can be used in practically any situation where the involved parties don't want to enter into a formal contract, they're fairly easy to write provided that you understand the primary components:

How Do You Write a Memorandum of Understanding?

MOUs have a unique drafting process:

Legal Considerations of an MOU

Is an MOU a legally binding agreement?

In order to be legally binding, MOUs must include the following:

With each of these sections in place, if the language of the MOU clearly outlines the terms of the agreement and is backed by consideration, the MOU may be treated like a contract and may be legally binding.

If you are worried about accidentally making a legally binding MOU, include a statement like this:

If, however, you want a legally binding MOU, be sure to use clear, specific language.

The best way to create an MOU that is also cost-efficient is to use a template.

The aforementioned will not, unless so authorized or required by the duties mentioned within, reveal or divulge to any person or entity any information concerning the affairs of Business, Ltd., or the affairs of any of Business, Ltd.’s subsidiaries. This restriction is unlimited and will only cease to apply to information that becomes public domain.

Language is the key factor that determines whether an MOU is binding in the eyes of a court. If the language clearly outlines mutual agreement, the terms of the offer, and is backed by consideration, the MOU will function like a legally enforceable contract even though it technically is not a contract. However, there are statements that can negate the enforceability of an MOU. Here is an example of one of those negating statements:

"This memorandum is in no way a legally enforceable contract between the aforementioned parties."

Only clear, specific language will make the terms of your MOU stand up in court. So, if you’re creating an agreement in which you want a legal edge without incurring any edges against your own interests, gear the terms in such a way that they absolve you of potential blame, and try to insert whatever binding clauses you deem necessary.

A great way to monitor the potency of your MOU agreement is to use a legally verified template, either by filling out a free memorandum of understanding template or creating your MOU based on a sample memorandum of understanding. Both of these tools can be found on the internet, though we recommend you do some background research and be sure you are using a reputable site.

MOUs occupy a somewhat nebulous legal space in the business world. Yet, they are also important documents for any individual or business. We hope this guide clarifies the legal standing of a MOU, its proper uses, how it differ from legal contracts, and how to use one.