A form 1099-C is a tax document used to report a debt of more than $600 when it is canceled by the lender. The lender creates and mails this form to the debtor. The debtor reports the amount from the 1099-C because they are liable for the taxes that may be owed on that amount. 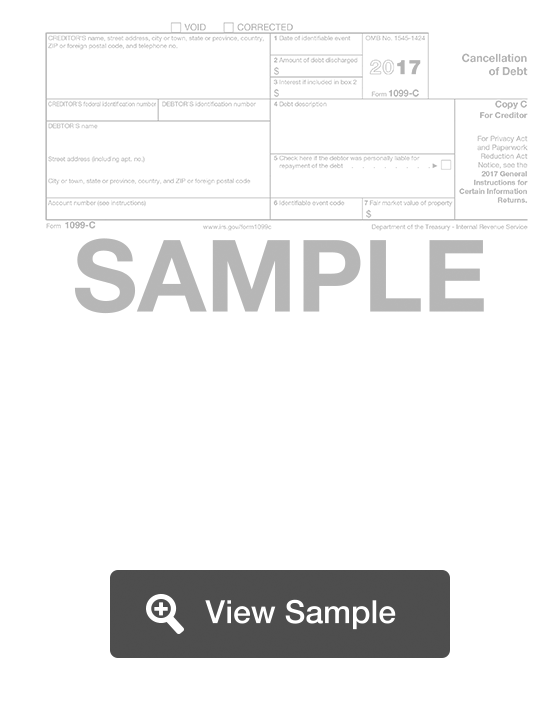 IRS Form 1099-C is used during the tax filing season. It is used for the purpose of cancelling debt. When a debt of over $600 is cancelled, it is considered part of your yearly income. You will then owe income taxes on this, just like your other wages and earnings.

Most canceled debts will need to be included when filing yearly taxes. There are a few exceptions. Debts that are cancelled through bankruptcies do not need to be included on this form. Certain loans related to your primary residence may also be excluded from taxation.

You may receive a 1099-C form from a financial institution or bank due to repossession, foreclosure, or loan modification. If you do not receive a 1099-C but you have cancelled a debt during the tax year, fill out a form on your own to be safe or contact a tax professional for advice.

Create a free 1099-C Form in minutes with our professional document builder.

A form 1099-C falls under the 1099 tax form series of information returns.  These forms let the IRS know when you have received income outside of your W-2 income.  Any company that pays an individual $600 or more in a year is required to send the recipient a 1099.  You are likely to receive a 1099-C when $600 or more of your debt is discharged.

The 1099C form has space for you to provide information about the debtor and creditor, date of debt discharged, whether the debtor was personally liable and the fair market value of the property.

To complete a 1099-C Cancellation of Debt Form, you will need to provide:

How the IRS classifies cancelled debt

The IRS classifies a cancelled debt as income because it is a benefit that you receive without paying for it.  You did not have to pay a tax when you borrowed the money because you were under a contract to pay it back. If a debt is cancelled, the contract no longer exists and you essentially received money for free.  The cancellation of your obligation to pay money back makes it taxable income.

Following the 2007 real estate market collapse, Congress passed the Mortgage Forgiveness Debt Relief Act.  For the calendar years of 2007 through 2017, you could exclude up to $2 million in forgiven mortgage debt on your principal residence if you were married or filing jointly or up to $1 million if you were filing under any other status.

If your debt was discharged in a Title 11 bankruptcy proceeding such as a Chapter 7 or Chapter 13 bankruptcy, you are not responsible for taxes on the debt.  If you can show the IRS that you were insolvent at the time the debt was cancelled, you can also avoid taxes on the debt.

If you received the 1099-C because of a settlement agreement where you paid off debt for less than the full amount due, then you do not owe anything.  If the form was filed because you haven’t made payments for three years and they haven’t tried to collect recently, than you may still owe the debt. Your state’s statute of limitations may determine what debts you are still responsible for.

Yes, you have to pay taxes on the amount listed on your 1099-C.  However, if you demonstrate that you qualify for an exclusion or exception, you may be able to avoid paying taxes on all or part of that amount.

What if I don’t receive a 1099 c for cancelled debt or old debt?

Even if you do not receive a 1099-C, you are still responsible for reporting canceled debt as taxable income on your federal tax returns.  If you fail to report a discharge of indebtedness, you will likely hear from the Internal Revenue Service for your failure to pay.