What is a Limited Power of Attorney?

A limited power of attorney form may be a legally binding document that provides decision making power to another person. This power of attorney explains the exact decisions that the principal grants to the agent or attorney-in-fact. For example, a book agent may have the author they represent sign a limited power of attorney. The power listed may be that the agent has the right to cash the checks sent to them that are made payable to the author. The agent takes their commission out of that amount and then provides the rest of the funds to the author (generally in the form of writing a new check). 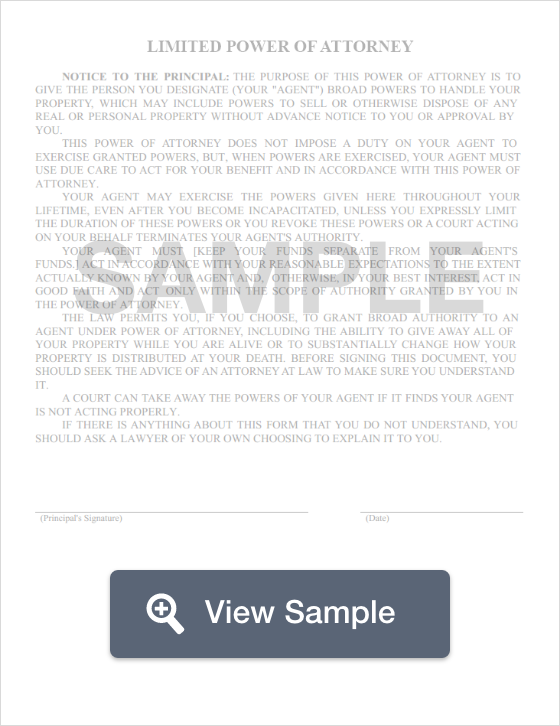 What is a Limited Power of Attorney (POA)?

A limited power of attorney (POA) is sometimes called a specific power of attorney or special power of attorney. It sets the scope of authority granted to a named and trusted ‘attorney’ (referred to as an agent or an attorney in fact in most states) by a ‘principal’ (the named individual giving their permission) who grants the other party specific powers to make decisions related to their personal or professional life. This document may or may not give durable power.

A common use of a limited power of attorney is one used in the entertainment business. Many times, a talent manager or agent will have their client sign a limited power of attorney so that they may cash their client’s checks on their behalf. The manager or agent will receive and cash the check, take their commission, and issue a new check (minus their percentage) to the client.

Definition of a Limited Power of Attorney

The Timeframe of a Limited Power of Attorney

Generally, a limited power of attorney lists a starting and ending date for the validity of the document. For example, if you were traveling abroad for two months, the start date would be the day that you’re leaving the country and the end date would be the date of your return. It may also have certain triggering factors that end the document’s validity. For example, the limited power of attorney would be revoked upon the death of the principal. It may be revoked in the event the agent is the spouse of the principal and they undergo the divorce process and the principal remarries.

How to Make a Limited Power of Attorney (Step-by-Step)

The second step is just as important as the first step: choosing the right person to act as your agent. This needs to be someone you have deep trust in and that you know will do the right thing. This person should also be responsible with money.

The fourth step is executing the limited power of attorney. Depending on the state where you live, you may be required to sign and date the document in front of a notary public. If it is being used to make financial decisions, your state may require you to also have witnesses.

How to Write a Limited Power of Attorney (Step-by-Step)

To write a limited power of attorney:

A limited power of attorney limits the agent's scope to act on behalf of a principal to particular listed purposes for when the principal isn’t available or is unable to do so.

Who needs a Limited Power of Attorney?

People who may find this power of attorney useful are:

Anyone who is over the age of 18 and who may be unable to manage their own affairs in the future due to an anticipated absence or a physical or mental disability that prevents them from making their own decisions may find a limited power of attorney ideal. For example, an active military member who is going overseas may choose to use a limited power of attorney to nominate someone in the United States to handle their personal affairs in their absence.

What can you use this POA for?

You can use this power of attorney for any activities carried out by the principal who is not able to carry out their responsibilities, either due to anticipated absence or sickness contingency planning. Remember, the purpose of this document is to give specific direction. It does not cover every situation. Other POAs you may want to consider are general power of attorney and springing power of attorney.

Limited power of attorney forms are used for limited purposes for a limited time period. Examples include acting on behalf of a principle for healthcare, personal care and custody of children, real estate matters, and buying, selling, or disposal of assets.

Create a free Limited Power of Attorney in minutes with our professional document builder.

Components of a Limited POA

It’s imperative that the principal details the agent's authority to sign documents or give instructions in the best interest of the person giving them the power. The details are important because the POA may be shown to third parties to prove that the attorney in fact is acting within their legal capabilities. This POA may only cover a single matter, such as signing a specified contract which the person granting power is unable to do due to anticipated absence or to make allowance for potential sickness.

Scope and Limitations: A limited POA may apply to a single area of activity, such as the handling of investments. For example, an investment manager, acting as agent, may have authority to:

In this case, the ‘limited’ power may refer to the fact that the account holder, or another authorized agent, manages other key investment account functions, such as cash withdrawals, beneficiary alteration, or other significant details.

Both the agent and the principal should keep a copy of the signed and notarized legal document for their records.

How Long is a Power of Attorney Valid?

You set the length and considerations of your power of attorney document.

This is our guide to power of attorney (POA) forms for American-born children of undocumented parents. While there are numerous situations in which POAs are useful, we focus here on undocumented families. POAs are important documents to have in place for families with undocumented members should they face detainment or deportation. In a moment in which political capital is increasingly spent on “securing borders” and arousing fears of undocumented immigrants, we hope this guide helps alleviate a small amount of the stress undocumented families constantly live with by providing tips for how to put processes and documents in place to protect your loved ones in the event of a detainment.

Who Can ICE Detain / Deport?

The US-born children of undocumented immigrants are entitled to certain rights. Those include:

How Can Children Protect Their Undocumented Parents?

There are a few things a child can do to ensure greater legal protections for their undocumented parents. If your parents live outside of the country, US law allows a US citizen to petition for undocumented parents to become citizens. However, the citizen-child must be at least 21 years old. Further, the child also has to be currently living in the US and must earn an income sufficient enough to support their parents upon arrival.

If your parents are living undocumented in the US, there are few options available. Typically, parents must live outside the US for ten years before applying for a green card. Only in rare cases can parents obtain a waiver of unlawful presence. Obtaining this waiver is expensive and usually requires a lawyer.

How Undocumented Parents Can Prepare for the Worst Outcome: Deportation

Obviously, a deportation and the resulting separation of a family is the worst case scenario for a family. While families with undocumented members often live in constant fear of separation, we recommend putting measures in place to minimize the financial and legal impact of deportation. Here’s our checklist:

If you do not want your child(ren) to go with you to your country of citizenship, you should create a power of attorney (POA) that appoints another caregiver for the children that becomes active if you’re deported. Make sure the POA authorizes the caregiver to make decisions pertaining to your kids’ travel, healthcare, and schooling. However, with a POA, you can only appoint a caregiver for a finite period of time, which varies by state. The POA can also include instructions for how /and when children will reunite with you.

When choosing a caregiver for your children, make sure they meet the following requirements:

Kinship caregivers (relatives or family friends) are most preferable. If you have multiple children, you may choose a different person to care for each child, especially if the associated economic cost is too burdensome for a single person.

Make sure you set up a UTMA (Uniform Transfer to Minors Act) bank account for your child(ren). A UTMA account will make it easier for your appointed caregiver to access funds for your child’s expenses. If you are leaving significant financial resources, you should consider establishing a trust. If you choose a trust, be sure to include access requirements in your POA.

As with the above section, we recommend having an emergency plan in place in case your family faces a deportation, which usually occurs without advanced notice. A family emergency plan should contain all of the important info that a child and/or their caregiver will need if a parent is detained. That information includes:

If some members of your family are undocumented, we recommend you meet with an immigration lawyer to learn about your possible legal rights and risks. Here is a list of basic questions to ask an attorney:

Immigration, especially in our current political climate, is a highly-divisive issue. More importantly, it’s one that threatens the families of the nearly 11 million undocumented persons living in the US. We hope this guide provides some basic information on how undocumented families can prepare themselves should one of their loved ones face deportation.

K-12 Children of Undocumented Immigrants in the US

A Limited Power of Attorney form sets out details of the scope of authority granted to a named and trusted 'attorney' by a 'principal' who wishes to forward plan for contingencies in their personal or professional life. It covers the term of delegated authority, amount of actions that might be required, regularity, and limitations to powers.

Promissory notes are used to record a debt that exists between two parties. This written promise states that one party will pay the other party a certain amount. It will include a specific date or it may include an on demand clause.